Please note that the US Post Office is experiencing notable delays in delivery times. We CANNOT guarantee any delivery time at this time through USPS and recommend using UPS if you have concerns about transit times.

We understand how frustrating this is but this is affecting the entire country and out of our control. Thanks for your understanding and patience.

On Coronavirus lockdown for the past few days, what better way to spend the time, fixing 40 year old arcade circuit boards.  Pulled out some Asteroids and Asteroids Deluxe boards, getting much better at fixing these, here are some repairs from the past week or so and a few other tips on fixing them.

Some things I do first on all Asteroids boards (haven't replaced all sockets on AD boards yet, so far they seem to hold up better).

Found some free to time to dig through a box of Crystal Castles boards we accumulated over the years. Most of these were straightforward repairs, but I'm not complaining, here you go:

Fixed a few Xevious boards a couple of months ago, still struggle with the sound on these. I have a few that I just can't get the sound going right (static at times, music issues), finally threw them back in the box for another day.  As with any board using those Namco custom ICs (Dig Dug, Galaga, Pole Position), I recommend carefully removing them and cleaning the oxidation of the legs, seems to solve some problems.  Most of these fixes were fairly simple, involving socketed rams and processors.

Here's some of the recent repairs and some from a few years ago. Enjoy!

Vertical Lines in some Video (10/18/11) – Video board issue, boardset booted up just fine, passed self test, but there were vertical lines in certain video portions (such as the “Xevious” in the title screen).  Piggyback 2148 rams at locations 5N, 5M, 6N and 6M.  Once I did 6N the video issue went away. Removed the ram (it is soldered) and installed a new 2148 ram and the video was good.

Vertical Lines in most Video (10/18/11) – Video board issue, boardset booted up just fine, passed self test, but there were vertical lines in certain video portions (such as the “Xevious” in the title screen).  Piggyback 2148 rams at locations 5N, 5M, 6N and 6M.  Once I did 5M the video issue went away. Removed the ram (it is soldered) and installed a new 2148 ram and the video was good.

Video Board has Garbage (10/19/11)  - Video board was not booting, came up with some garbage and would kind of reset/repeat the garbage.  Start swapping 2016/6116 Rams at locations 2E-2J.  Turned out Ram 2J was bad.  Replaced it and the board fired right up.

Boots and resets continually – Swapped out socketed ICs, bad custom 50XX at 6C.  Music was off, bad IC at 6L had no 32H signal.  Board died in testing, started reporting Ram 7 error. Replaced 6116 at 1H to fix problem.

Spent some time going from a pile of Atari System 2 boards I accumulated over the years as I had 720 in the shop that I was working on.  I didn't have any experience with these boards, but figured some had to be easy fixes and actually most of them were things like damaged traces or a bad socket, was surpised how many I got running. Here's some of the repairs, look out for broken crystals as well, I've seen them a few times on the video boards as they stand upright and get knocked off easily.

System 2 boards include 720, Paperboy, APB, Championship Sprint and Super Sprint, from what I've read they can be converted back and forth to some degree by swapping roms as well as the Atari Slapstic (security chip). Haven't tried it yet, but they CPU boards all look identical. I believe there were two versions of the video boards.  Repair logs follow, enjoy. 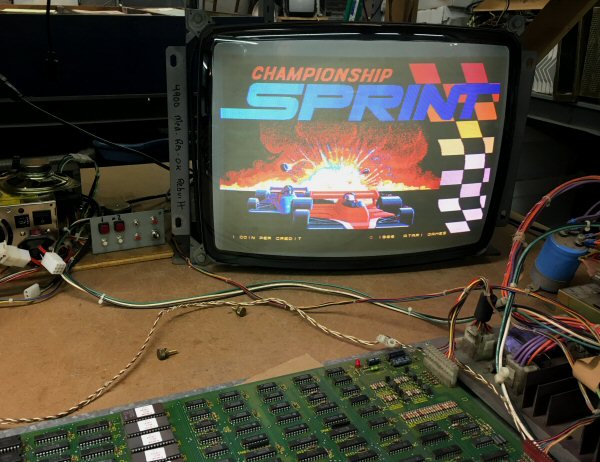 Super Sprint CPU (12/8/17) – Board booted to garbage on the screen, clock signal looked good, reset signal was low (normal) and data lines were moving. Checked program roms and ram, but they tested good in another boardset, which I expected. Was puzzled on this one as it seemed to be behaving normally based on other boards I looked at it.  After some probing around found that 14.318 crystal had a broken leg, replaced the crystal and boardset booted fine.

Super Sprint CPU (12/7/17) – Board booted to garbage on the screen, clock signal looked good, but board was watchdogging.  Checked program roms and ram, but they tested good in another boardset.  Pressing on the TII processor during boot-up got the board to show signs of life.  Replaced processor socket and board played fine.

Paperboy CPU (12/6/17) – Nothing on screen, just some white raster.  Quick inspection showed some traces that were scratched.  None were cut, but two were smashed together and shorted. Cleaned up the area, retested the board but still nothing. Clock signal looked good, reset line was watchdogging.  Swapped program roms and rams into known working board to find bad 6116 at 6P.  Board now boots up and plays but has a sound issue.

Self tested reported bad rom at 2D, replaced it but sounds were still off, but no longer reporting that error. Started swapping sound ICs and found bad YM3012 on row 8. Replacing that fixed the problem.  Rom error 2D popped back during testing, replaced socket and it is started working again.

Paperboy Video (12/7/17) –  Board booted with video issues. Swapping roms into known working board and found rom at 6T to be bad. Burned new rom to fix the problem.

Paperboy Video (12/7/17) –  Lines in the “paperboy graphic” on the newspaper screen.  Pressing on roms showed that it went away when I pressed on one.  Removed rom, cleaned legs and reinstall to fix the problem (forget which rom it was).

Paperboy CPU (12/6/17) – Nothing on screen, just some white raster.  Quick inspection showed some traces that were scratched.  None were cut, but two were smashed together and shorted. Cleaned up the area, retested the board and it came back to life.

Paperboy CPU (12/6/17) – Board booted with random specks of garbage on screen.  Removed T11 processor and reseated it, board came back to life.

APU CPU (12/6/17) – Board booted to garbage.  While checking program roms, noticed that two were in the swapped in the wrong location, moved them back to the proper location and the board booted fine.

I've mentioned it before that my board repair skills are decent, but not to the point where I can fix every board I come across. Centipede seems to be one of those boards that I either figure out and feel really good about my skills or spend a half day trying to fix one and ask myself why I even bother trying to fix them.  Here's are few repairs I made recently as well as some from way back. Enjoy!

One troubleshooting note on these, always put the game in test mode if it isn't working, ram failures are common and the self-test does a half-decent job of telling you what ram is bad.

Blue Screen (4/19/17) – Clean boardset that booted to a blue screen and that was about it. Swapped 6502, no change, put game into test mode and it beeped twice, indicated bad 2114 ram at F2. Removed, socketed and installed working 2114 ram to fix the boardset.

Plays, minor Video Issues (4/19/17) – I didn’t even realize the game had an issue until I played a game. Some of the centipede graphics were jumpy and other minor issues. Test mode reported a bad 2101 ram at L5 (six beeps), replaced this ram to fix the problem.

Plays, but Garbage Letters on Screen (2/28/12) –  Put game in test mode and it reported  Ram K7, replaced this and it then reported Ram M7 bad. It looked like M7 was already replaced (but not socketed).  Removed M7, installed socket, fixed broken trace from prior repair and put a new 2101 Ram and the board worked.

Plays, but Garbage Letters on Screen (2/29/12) –  Put game in test mode and it reported bad Ram K7, replaced this and it then reported Ram L5 bad.  Replaced Ram L5 and the board came up fine.

Video Issues, Zeros on Screen, No Sound (2/28/12) – Game would play, but there were zeros on the first screen. Reseating the character roms and the problem went away.  There was still no sound, checked around LM324 amp and found that the output was dead (input was dead too, but I assume the LM324 was causing that).  Replaced LM324 and sound came back.

No Sound (2/29/12) – Didn’t even bother troubleshooting, just replaced LM324 amp and the problem was fixed.

Garbage on Screen (2/29/12) – Board booted with some random characters on screen.  Tried test mode, but realized test switch was stuck on, replaced test switch, still garbage, nothing from test mode.  Watchdog was barking, tried disabling and test mode, but nothing. Swapped out four program roms (307-310) and the game came up with no background graphics.  Tried test mode and it reported a bad Pokey at C3 and bad ER-2055 IC. Replaced both of these and the board worked fine.